When Prince Vladimir the Great (Saint Vladimir of Kiev) was seeking a religion for his people, the pagan Kievan Rus, he sent emissaries to study and report on the religious traditions of all his neighbor countries.

When the emissaries returned from Constantinople, and described the Orthodox worship at the great cathedral of Hagia Sophia, they are reported to have said, "We no longer knew whether we were in heaven or on earth," and of the beauty of the church, "we know not how to tell of it."

We know longer knew whether we were in heaven or on earth. The visitor to an Orthodox church, on stepping inside, should ideally feel transported into a new world, one that affirms in the most forceful way that the beauty of God's creation is a manifestation of His glory and His love for mankind. The iconography that traditionally adorns the interior of an Orthodox church plays a major role in this affirmation.

Icons have also traditionally played an educative role in the Orthodox church, conveying pictorially the lessons conveyed verbally in the Gospels—art that is "a vehicle of the Gospel teaching," in the words of Leonid Ouspensky ("The Meaning and Language of Icons").

And perhaps most importantly, on a theological level, Orthodox icons—especially icons of Christ—are statements affirming the Incarnation: "The undepictable Word of the Father became depictable when He took flesh of you, O Theotokos" (Kontakion for the Sunday of Orthodoxy).

With the blessing of His Eminence Metropolitan Isaiah, our iconographer is Leonidas Diamontopoulos. He has been working on the icons in his studio in Greece, and will come to Fort Worth to oversee their installation this month. These icons included show some of the icons "in progress" at Mr. Diamontopoulos's studio.

This first phase of the project—the installation of icons in the altar area and the iconostasis is scheduled to be begin late this month to be complete in October. The scaffolding is already up and our very own Gus Galanis is preparing the walls for the installation.

We are receiving some concept prints for phase two and three of our project. These next phases will plan for iconography in the nave of the church to include icons of the Life of Jesus Christ, the Feast of Mary the Theotokos and full body icons of Saints. We will discuss in more detail with Mr. Diamontopoulos when he is here. I will share this information as it becomes available.

How can you participate? 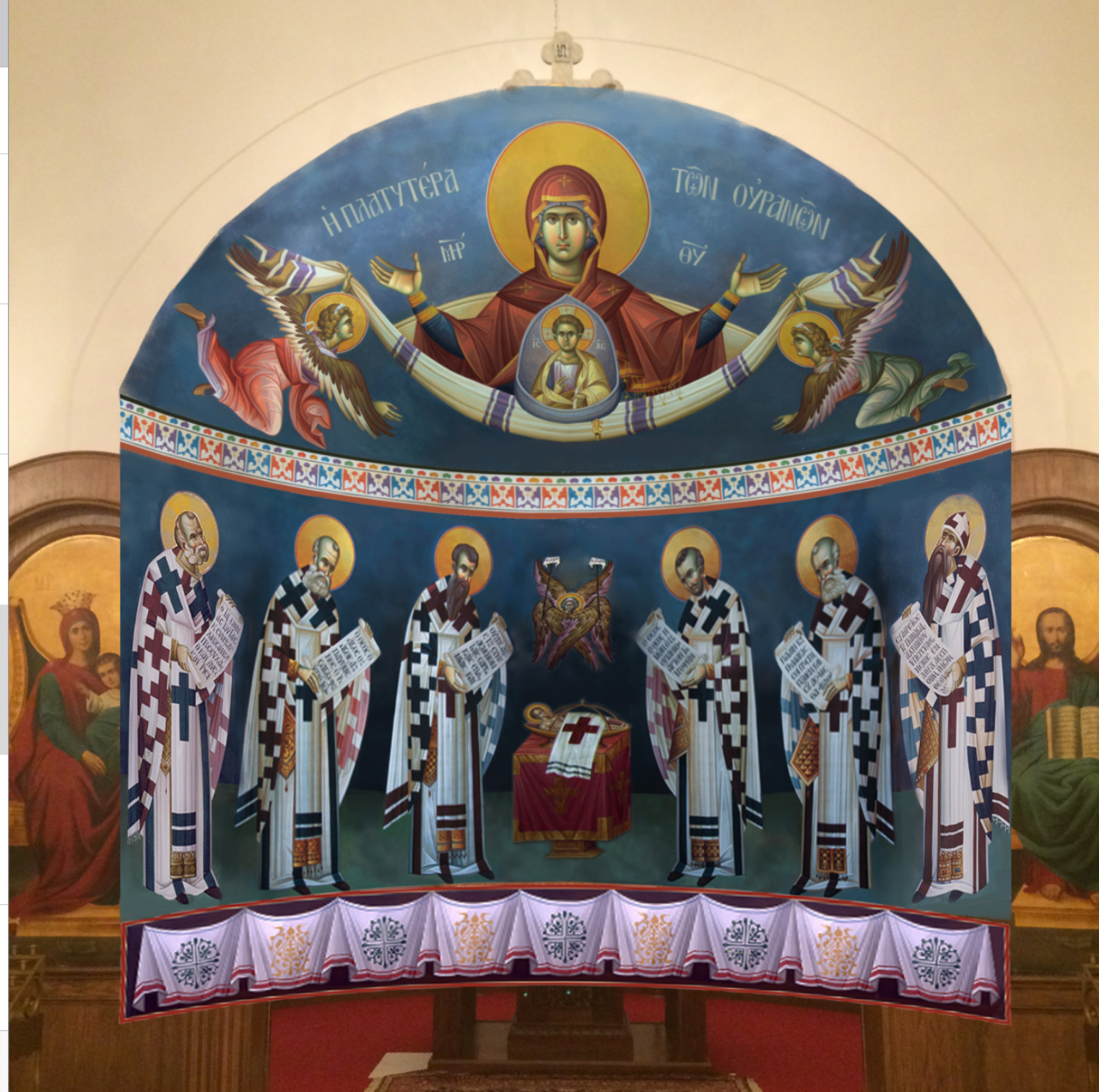 We are deeply grateful for the donations we have received to make this project possible. If you would like to participate, there are still opportunities to give. We would like to have all our parish family participate in this effort in some way, together returning to our Church the blessings and gifts we have received from the Lord. Please consider:

Giving individually - You may choose to donate a Feast of Christ (ie Baptism of Christ, Jan 6) or a full-body saint, as an individual or as a family.

Giving as a group - You may choose to donate a Feast of Christ or a full-body Saint icon as a group or an organization, a group of people, a family group, etc.

Making a general donation - If you are unable to make a donation for one specific Icon, you are encouraged to make any size donation to the General Icon Fund. This will help cover additional expenses attached to the preparations and installation of the icons.

If you would like to learn more about the iconography project and to give to the Iconography Fund, please speak with me or e-mail me frnicholas@stdemetrios.net.

It is with great  joy that we present to you our renditions for the beautification of our beloved church.

Behind the Iconostasis, the beautiful icon known by its Greek name of “Platytera Ton Ouranon”; Translated from the Greek: "[She who is] "More Spacious than the Heavens", or simply, Πλατυτέρα will be installed. It is the icon found in most Orthodox churches in the very prominent position - high in the front apse over the Altar table just above the mercy seat of old, and is often of such scale that it overwhelms and overshadows all other icons in the Church. Our liturgical texts proclaim the following: "He whom not even the universe could contain was contained within the womb of a virgin, making her more spacious than the Heavens,” and “Who for us men, and our salvation, came down from heaven, was incarnate by the Holy Spirit and the Virgin Mary and became man.”  Mary, the Theotokos and Mother of our God, becomes the unique person through whom God takes flesh and becomes Man thereby permitting mankind the promise of divinity and eternal life. The metaphors that are used throughout the Holy Bible to refer to her central role in God's Divine Economy are many:

Just as Aaron's Rod sprouted miraculously in the Old Testament, so too, the Theotokos has budded forth the Flower of Immortality, Christ our God (Num. 17:1-11). 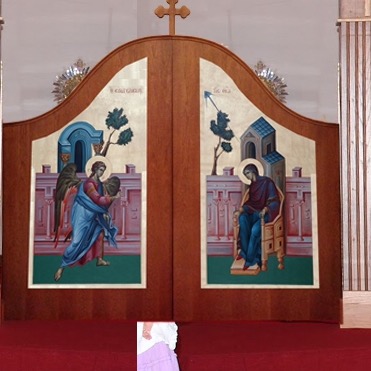 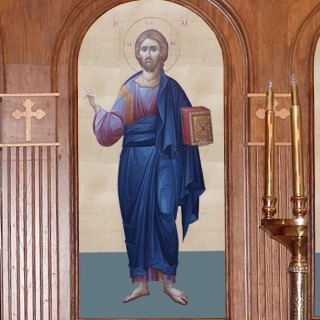 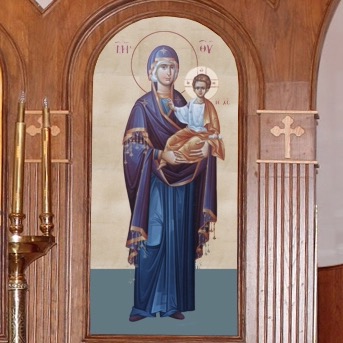 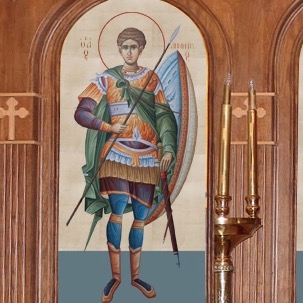 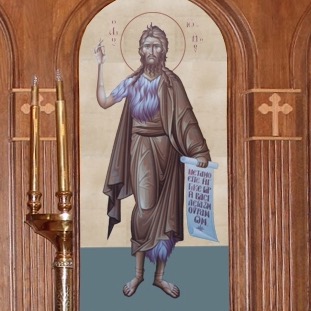 St. John the Babtist and Forerunner 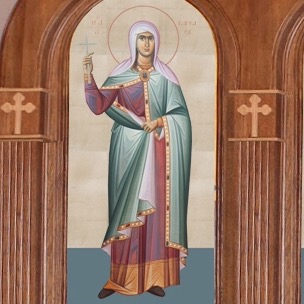 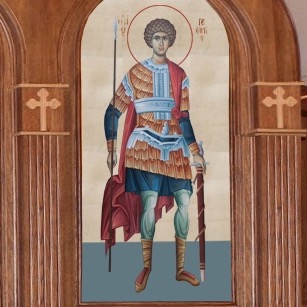 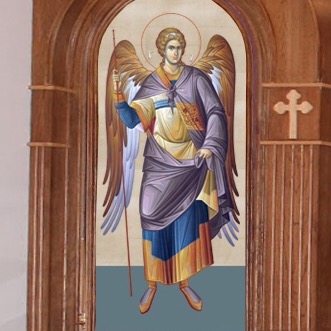 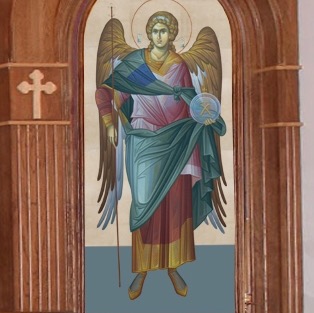 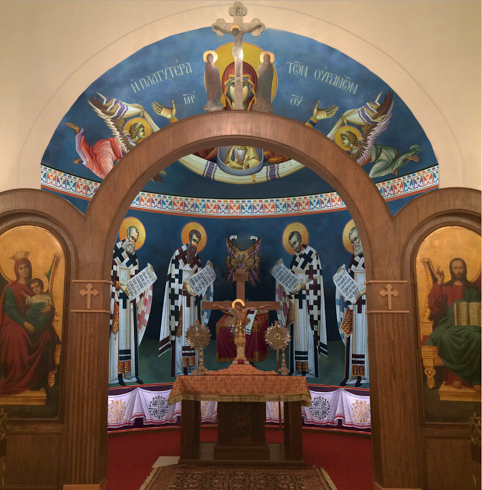 Angels at the mercy seat of Christ, glorifying Him. Seraphim: Prophet Elias had reported that the Seraphim above Christ, sing praises to God and unite the Divine Liturgy on earth with the Divine Liturgy of Heaven.  Infant Christ, depicts Him as a naked baby on the Holy Altar and symbolizes the transubstantiation of the consecrated bread into Body and of the wine into Blood.  It's the moment of the partition of the Consecrated Bread.

The Church is the image of the immaterial and of the sensory worlds– of the spiritual and the physical man. The Sanctuary is the symbol of the first, the nave– the symbol of the second. At the same time both these parts constitute an indivisible whole, in which the first enlightens and feeds the second, so that the latter becomes a sensory expression of the former.  This correlation re-establishes the order of the universe violated by the transgression (of man).  The Church is the earthly heaven where God, Who is above heaven dwells and abides, and it is more glorious than the tabernacle of witness. It is foreshadowed in the patriarchs, is based on the Apostles… it is foretold by the prophets, adorned by the hierarch, sanctified by the martyrs, and its high Altar stands firmly founded on their remains.

It represents what is on earth, what is in heaven and what is above the heavens.  The narthex corresponds to earth, the church to heaven and the Holy Sanctuary to what is above heaven. All the icons are arranged in accordance with this symbolism.  It is a definite system corresponding to the part of the building where a particular image is placed.

The iconostasis has a symbolic meaning as well. The Holy Fathers liken it to the boundary between two worlds: the divine and human, the permanent and the transitory. The Columns represent the firmament, the, dividing the spiritual from the sensory. The horizontal beam, denotes the union through love between the heavenly and earthly. The Iconostasis, also unites the two worlds, the divine and human.